WHY I WROTE A BOOK ABOUT MENTORING

I often get asked,

“When was the decision made to write a book?”

The day I made the decision is as clear in my mind today as it was on the evening of 16th August, 2015, as I sat at an event in a ballroom at the Westin Prince Hotel in Toronto Canada.

Just a week or so earlier, I had received a special invitation to this event by my good friend and mentor, Bob Proctor.  So I quickly rearranged my schedule in order to be there.  I’ve always worked on my personal development because it’s more about what I’m becoming rather than what I’m getting.

On this night, Bob was on stage and I can still hear the words he spoke into the ether,

“By the end of this event, all of you will be asked to make a big decision that will have the ability to change the course of your life”.

Now allow me to digress a tad and admit that I had always found making decisions extremely difficult because they were usually forced and based on fear from old habits with unsuccessful results.

So, when Bob’s words of invitation hit my ears about us having to make a decision, I jumped at the idea of making it fast and making it now (then and there).  It was time to act instead of react.

I sat anxiously toying with this whole idea of becoming an author and not knowing where to begin?  All types of thoughts swirled in my head of ‘failure’ and ‘what will others think’

Then, I heard the announcement that our day one session was ending.

It was available and I immediately purchased it. Phew!

Just minutes later, Bob rang my mobile phone and invited me over to his home.  He wanted to give me a personal tour of his new recording studio that he had built out the back of his home where the pool pump-house used to be.

After an amazing tour of Bob’s studio and some laughs that we often share of past adventures, Bob offered to drive me back to the hotel.

After a long day of hosting the event and then giving me a tour of his studio, Bob could have easily suggested I take a taxi or book Uber back to my hotel, although on most occasions when I visited Toronto, Bob would go out of his way to either pick me up from the airport or drive me to a location.  There’s a lot to be said for my mentor who was then 82years of age.

On this 15-20 minute ride back to my hotel, I mentioned to Bob that I did not need the rest of the week to make my decision.  Bob listened intently as he sat upright and in command of the opulent vehicle that could almost self-drive.  He slowly turned his head my direction and in his deep resonating voice said,

“Yes that is correct.  I will be writing a book!”

“Will you now?  And what would the title of this book be ?”

“The Mentor and Me.”

“And I would be the mentor in this book title ?”

There was long pause of silence.  I could tell that Bob was thinking this through as he is always a great thinker.  Not another word was spoken as the car made the final turn into the hotel.

The next morning as we assembled for the 2nd day of the event, Bob was the first speaker on stage and he said that there was a very special announcement . . . “of someone that has already decided here in this room to write a book.”

I began to immediately scan the faces in the room to see who had beat me to the same decision?

Bob continued and told the story as to how he had asked his Graphic Designer, Patti, to create three possible book covers for this new book . . . “that we’re just about to share” . . . and that the audience would be voting on which one to use for the published version.

By the way, I later learnt that Patti just only just landed at 10:00pm the night before from Arizona.

I (we) all sat in utter anticipation as Bob prepared everyone to focus on one of the two massive screens in the ballroom.

“The Mentor In Me” by William Todd.

My heart palpitations became stronger with the idea of everyone grabbing their mobile devices and searching the book title name, only to see that there was no website or domain name . . . I panicked that someone of the same entrepreneurial mindset would buy it.  Oh boy!  I was shaking and couldn’t type fast enough on my own iPhone to try and access the internet.

Just then, a steady hand was placed on my shoulder and Bob slipped a note in front of me and whispered in my ear,

In Bob’s handwriting, the note read —

The purpose of ‘The Mentor in Me’ is to bring out the mentor in you. That is the correct title.

This illustrates the power of enlisting a mentor to help you. They just know!

The cover you see today is the one that the audience voted for unanimously, and no, I am not left handed 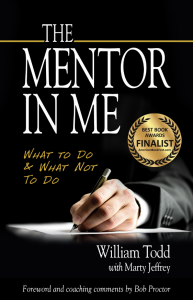